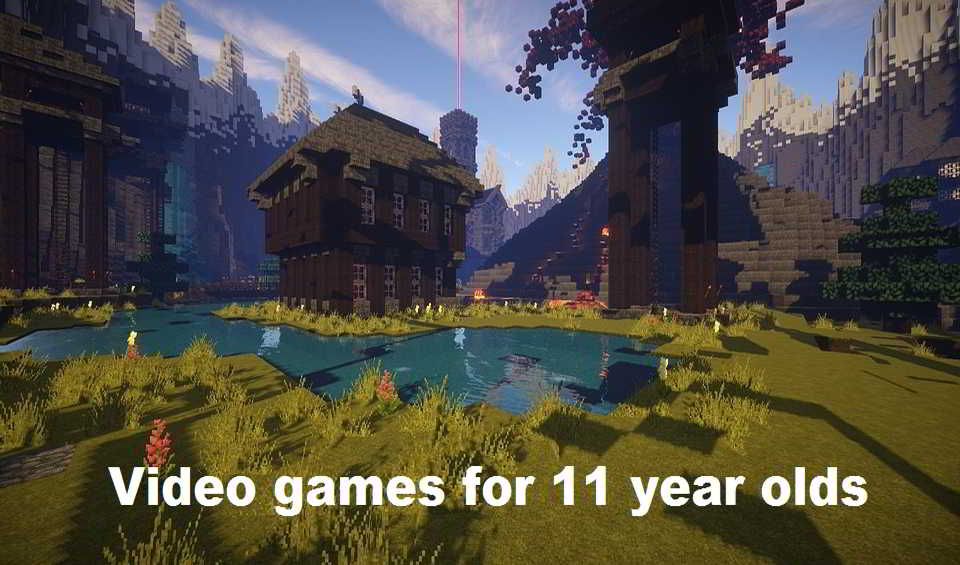 If you’re looking for ideas on the best video games for 11 year olds, read this to the end.

Below we have compiled a list of great video games that most 11 year old kids will enjoy (I should add that there are a lot of options out there).

LEGO games are brilliant for this age group.

That being so, I suggest that you try Ninjago, Lego Batman, Harry Potter, Lego Worlds, Lego Avengers, and Lego Star Wars,  all on Steam. Based on the famous SpongeBob Squarepants show, this is another genuinely good game for 8-12 year-olds.

Your son or daughter will be thrilled to play this action-adventure game where Kids play SpongeBob, Sandy, and Patrick as they rescue Bikini Bottom from the rampaging robots. Minecraft games are insanely fun for most kids and have been rated safe for kids between 7 to 13 years old, depending on the version they are playing.

The greatest thing about Minecraft is that it is neither overly violent nor that difficult for this age.

Overall, your kid will be safe as long as they don’t play the multiplayer version online from a public server- here bullying from strangers can be a potential issue. I will also suggest trove (on steam). As an alternative, you can look at Half Life 2 still on steam..

The game is typically fine for kids 10 and up though there are some violence levels that can be a little bit disturbing-But most handle it.

This puzzle-platform video game can be a good starting point when it comes to the best video games for 11 year olds since it’s a universally loved game by both young and adult gamers, regardless of their favorite genres. Another massively popular game with this age group, Rocket League is like an online arcade-style soccer game but you play with cars (it’s total vehicular mayhem!).

The most fantastic thing about Rocket League is that while it’s safe for even younger children, gameplay can be pretty difficult so your 11 year old son or daughter will still get a good challenge. In this wholesome game, kids play as a pesky goose who makes the life of the unsuspecting villagers unbearable..

It’s packed full of “comic mischief” and is an extremely light-hearted affair without any actual violence or blood (there is nothing inappropriate).

Download it here (it’s available for all video gaming platforms).

Keep Talking and Nobody Explodes This can be another enthralling, simple-to-play multiplayer game that your 11 year old boy or girl can enjoy with friends on Steam.

The intelligent use of technology in the game makes it really fun for kiddos. Yet another all-around great game on Steam with only occasional, super mild violence (and in a uniquely comical context).

Players control B.U.D., a robot tasked with a tough mission: To grow a “Star” plant that will ultimately oxygenate its entire home planet.

The game requires a gamepad to play. The game is such a pleasure to play- Every game level is unique and packed with charm (from the envious but super-determined enemies to impressive, vibrant backgrounds.

Most importantly, this game is quite challenging so beating a level gives kids immense satisfaction.

Buy it on Amazon now. Splatoon 2 is an excellent non-violent game whose highlight is the ink-based gun play.

For that reason, it can be a friendly alternative to more violent shooting games for 11 year olds.

There are single-player as well as online multiplayer modes (various) in this fun cartoony game. Frantics (also rated E to mean suitable for everyone) is an outstanding party game where players control clay animals by way of mini-games.

To be clear, there are 5 intriguing mini-games including racing spaceships attempting to push rivals off an iced-up island, and parachuting while frantically collecting coins.

Check it out here. Because of this, there are countless game options, some incredibly good for all age groups.

It’s an online gaming platform where kids can play games together (they can create too) so you may need to select “Restricted Mode” to protect your children against possible harassment. What about building and managing everything in a theme park that’s full of out-of-this-world roller-coasters rides?

There are 3 fun-filled modes (adventure, sandbox, and scenario) and play is deep and addictive. In this spectacular 3D fighting game (Nintendo Switch), kids use a mixture of simple motion and straightforward button controls to fight rivals in a really fun fantasy boxing game.

Onrush  (PlayStation4 and Xbox One) This is a magical racing game where kids compete for the off-road racing championship with cars, motorcycles, ATVs, etc.

Having fun is equally as important as fighting for victory here!

This is another child-friendly adventure-platformer where players take up the role of Yoku (a beetle) as he embarks on exploring his ancient island and its many caves.

Creatures (of all sizes) lurk everywhere!

Check it on Steam.

These are the Video games for 11 year olds that we feel could interest your child.

In fact, some will still be fun as he/she grows up so we are hopeful that your son or daughter will enjoy a few.

PS: If you are looking for fun and educational games, be sure to check Portal 1/2 (Teaches basic physics), Baba Is You (Teaches logic and programming), and Kerbal Space Program (For learning physics and classical mechanics).