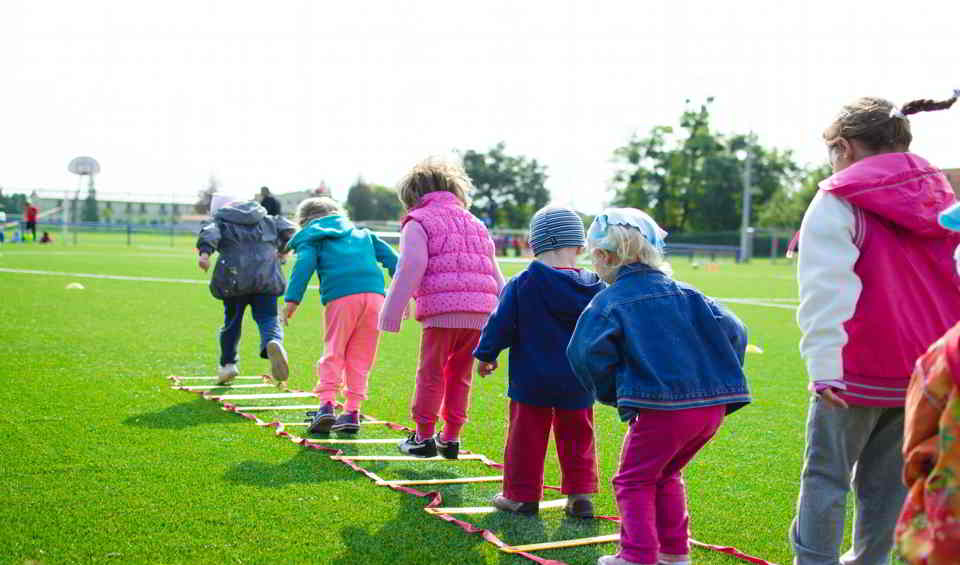 Kids can reap countless benefits when they engage in outdoor play including developing good physical fitness and stamina.

Outdoor play is also a great opportunity for our kids to connect with nature (while bonding with their peers, siblings, and parents).

Below are some interesting and challenging outdoor games for older kids- don’t forget that as they grow older, our kids will want to participate in play that is more fun and challenging in all ways (mentally, physically, etc.).

Here are some of the best outdoor games for older kids when you want them off the screen:

You must have played SPUD in elementary school- We all loved it and your older child will probably enjoy it too!

How to play spud outside

Have the kids who want to play this spread around and have your playground ball with you first.

You will start by counting everyone (one, two, three, four, five, etc.) so that everyone has a number.

Then, the first kid (the kid you designated number 1 or “It”) stands in the middle of the group with the ball and he throws it up high (highest, straight up) in the air and then yells a random player’s number (e.g. number 1 can shout 5 to refer to player 5).

Everyone now runs away but the player whose number was called (player 5, in our case).

Here is the sweetest part – the player whose number was called must try and catch the playball as fast as possible.

Once they do, they yell out SPUD and every kid around has to freeze exactly where they are (you cannot move anything, even a little bit and if you do, you automatically get letter S).

Now the kid with the ball throws it at another random kid- and whoever is hit by the ball gets an “S” (And they will be next to toss the ball up)- and if you don’t hit them, then you get a letter so he/she might still be the next player to throw the ball up).

Repeat the game (the above player throws the ball up) and the next player to be hit gets a letter and so forth.

The first kid to get the 4 set of letters “S-P-U-D” loses this game.

This outdoor game is lots of fun and can be played with a small or large group.

Watch this Video for a demo.

This popular game is not only thrilling but is magical for stealth, strategy, and stamina!

They will need a kickable object (an old empty can -sometimes with rocks added inside for noise- is our favorite).

Gather four kids and appoint one kid as “It”. The “It” child kicks the empty can as far as he/she can while other kiddos run off somewhere to hide.

Now, “It” covers his/her eyes and will start to count to a previously agreed number (like 100).

After she/he has counted to 100 (or whatever number), “It” goes to where the play can is and sets it upright then yells “”Ready -or not-, here I come.”

The kicker then goes searching for other kids in the area and he/she shouts the name of the player she finds out loud (immediately she finds someone).

Both kids now make a dash for the can and attempt to kick it.

The game will end if the hider manages to kick the can otherwise the unsuccessful hider will become “captive” near the can -and play continues.

The captives are set free from “Jail” if other hiding kids kick the play can without being seen.

The game will end once all players are captured.

Here is a nice demo.

We don’t want to tell you about hide and seek because you likely have it on your mind– it’s definitely one of the most straightforward and easy outdoor games for older kids -but what about its reverse?

Well, Sardines is literally hide-n-seek flipped right on its head.

And here is how it’s played:

With their eyes shut, seekers (kids) congregate and start to count to a pre-determined number while one kid hides.

Now, instead of every kid hiding all at the same time and one kid doing all the searching, everyone will be doing the searching here.

And once a kid finds the “hider”, they’ll join him/her in their hiding spot.

The game will end when the last kid standing finds the hidden group (the hiding group often ends up appearing like a whole bunch of sardines)- and this player loses the game.

Disc golf is another extremely popular game that combine frisbee with golf.

In fact, the rules are pretty much similar to golf, but kids will be ‘throwing’ a Frisbee- into a basket- instead of striking a golf ball-into a hole.

Here is a great video teaching the basics.

This would be another cool game to play for a large group of older kids.

Have the kids form 2 teams.

The teams then line up (facing each other)- and they should form a chain (by holding hands).

You then flip a coin with the head going first (the team that went for the head will be your team one).

Now, team one decides who they’d like to call over from the rival team and shouts: “red rover; red rover ;send (name of the player) on over!”

The selected player will then run toward their opposing team while trying hard to break through the joined hands of 2 teammates.

Now: If he/she doesn’t, they must join that team.

And if they succeed, they will bring back one of the 2 players from the link they broke with them!

Here is a nice demo video for starters.

Playing lawn darts is a smart way to spend some precious time with your kids outside too.

Oh, and we cannot think of a better way to work on your accuracy and aim while having a blast than a game of darts in your backyard.

Here is a set of well-constructed lawn darts game set to get your kiddos started (comes with instructions).

Instead of playing the normal tag, kids can add a funnier twist- and make winning the game more about tact and stealth- by using flashlights.

Kids can play this as individuals or even as a team- they will have immense fun either way!

This needs a tennis ball and a brick wall.

Essentially, kids throw the tennis ball up -against the wall- then attempt to catch it.

If they fumble the ball, they must run to the wall and actually touch it before another competing kid picks the ball up and throws it himself/herself to the wall.

If they get the wall safe, its game on but If they are out, they must stand up right against the wall-  and other kids get a free shot at their ass with the ball (ouch!).

Of course, NO HEAD SHOTS are allowed!

The is another ‘safer’ variant where rather than line up against a wall, the kid who missed spell out R-E-D A-S-S and they then retire from the game.

With snowballs like these, your children can play anywhere, anytime throwing them at each other in a mock snowball fight.

These balls are super lightweight and fly farther just as real snowballs!

Everyone will have a time of their lifetime fighting their family and friends (no head shots here as well).

If you can bring a couple of balls with you, then playing some old-fashioned Soccer, kickball, or something similar can be a clever way to keep older kids busy and active.

As an alternative, you can have them play dodgeball, prison ball (It’s like dodgeball), basketball, or baseball / softball depending on the location and what’s available.

The above games will motivate your older child to want to play outdoors more often.

Most importantly, they will benefit a lot by playing these games- from challenging their muscles to building on their physical endurance and even enhancing their social skills (when they play in groups).

Bear in mind that this doesn’t by any means exhaust all outdoor games for older kids – there are other great games that can be fun including street hockey (a kit like this will be needed), Croquet, Manhunt, Ultimate Frisbee, and so much more.

So let the fun begin!

Looking for Electric cars for 14 year olds? Read this