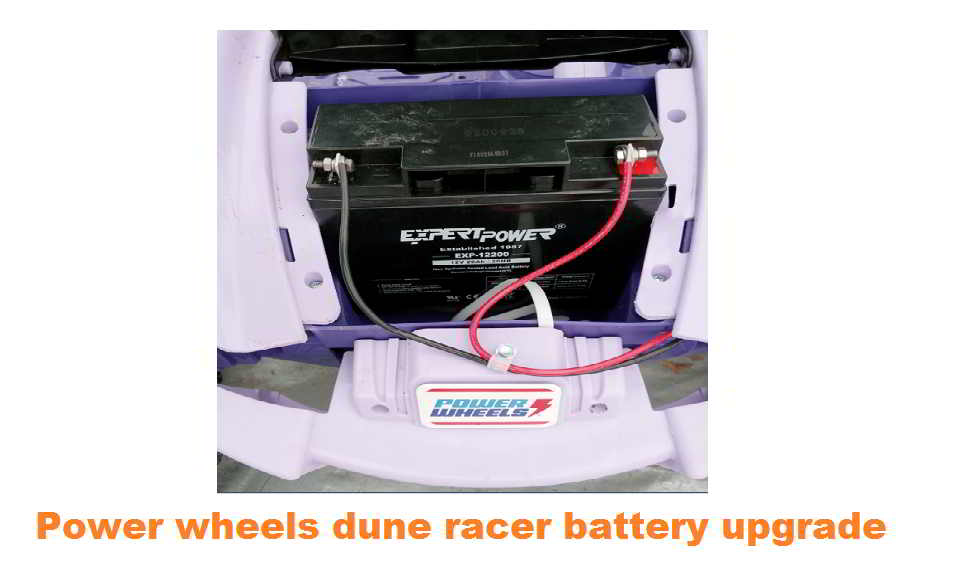 If you decide to go down this route, below is how I did it (and made my daughter the happiest kid on earth, at least for a few days)…

Power wheels dune racer battery upgrade – How I did it

For my power wheels dune racer battery upgrade project, the first thing I did was purchase a few accessories.

The good thing is that the entire set of the needed parts doesn’t take a whole lot of money.

Here are the things I bought for my power wheels dune racer upgrade job: You can either find a way to plug in this upgrade battery to the vehicle or use this connector.

One way- if you’d rather not buy the adapter- is breaking the top of your PW battery apart and pulling out its connectors and then attaching them to your new battery.

But that’s slightly more labor and to make matters worse, you will probably require to do some soldering.

On the whole, buying the connector will make life easier for you (A 30-AMP fuse has already been installed on this harness so the whole circuit will be protected in case of an overload).

This universal battery charger charges fast and was a great upgrade on the charger that came with my daughter’s  Dune Racer (it was working only intermittently).

The best thing is that it figures out when your battery is full (and switches to trickle charge so you don’t need to worry about it damaging the battery by overcharging it).

From my local hardware store I purchased 12ga wire, wire holders, and terminals.

The Dune Racer feature a battery compartment in the front (over it, there is a little hood) where the original battery is placed.

To remove the battery, simply open the housing then disconnect your old battery (from inside).

Step 2: Install the new battery in the housing

Place the new battery (in the housing) in the exact matching way as the old battery.

Step 3: Route the wire from the battery to adapter.

The adapter has another huge advantage- it lets the stock PW harness remain in place (so it will still be possible to use your stock battery as a spare once the bigger battery runs down).

Bear in mind that the connector and battery connects to the car and the charger in separate ways (the charging cable plugs into the inside portion -of the connector- where there are two metal leads).

The thing is you need to route it from the battery to the back (the adapter ends at the back of your car).

Now, to run it from the back (of the car), you will make use of the 12 gauge wire, the terminals, and your wire holders.

To be clear, I used self-tapping screws to mount the wire-holders into the plastic.

In general, you can be creative when it comes to doing the routing and here are a few pictures to give you an idea of how I did mine. And here is the battery housed inside the compartment Of course, the battery has 2 leads, one red and one black.

As you can see in the above picture, you just charge the new battery in the toy vehicle as it is pretty heavy (don’t forget that the wiring has been screwed to the vehicle as well).

To charge, you simply plug in the adapter into the charger. Once you are done with the upgrade, your power wheels dune racer battery life will extend noticeably (which equals more fun time for your wannabe driver).

And so your kiddos will always have a blast whenever they go out riding their power wheels.

Be sure to search for a YouTube video on how to install a larger battery for a Power Wheels Dune Racer for step-by-step instructions (here is good one).

Power wheels dune racer vs extreme -which is the better buy?

How to tell if power wheels battery is charging